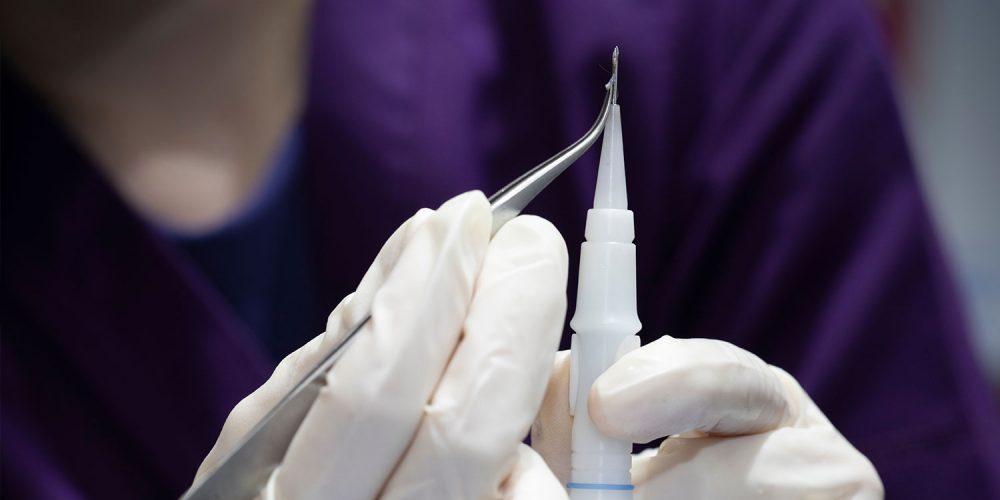 DHI hair transplantation is an innovative technique of hair autotransplantation. It consists of the extraction of follicular units, called grafts, from one or more donor areas and their direct implantation into the areas affected by thinning.

This treatment can be considered an evolution of classic FUE and generally provides better results.

What is a hair transplant

Hair loss is a common experience for both men and women that can have psychological consequences. Indeed, having little hair often makes us feel less confident, less attractive, and weaker.

In this context, among the most effective solutions in modern medicine is hair transplantation. This is a surgical procedure during which follicular units of hair and hair are extracted from a high-density area and implanted on the same patient in more thinning areas. For this reason, it is also referred to as autotransplantation.

In most cases, the donor area par excellence is the occipital area, which is the back of the scalp. It is also possible to extract hair from other parts of the body, such as the beard or chest.

The most common receiving areas are the frontal, temporal, and vertex areas.

The peculiarity of DHI hair transplantation (an acronym for “Direct Hair Implantation”) compared to the FUE technique (an acronym for “Follicular Unit Extraction”) concerns primarily the instrumentation. In DHI, the so-called “Choi Implanter Pen” is used, a pen-shaped medical instrument that makes it easier to extract follicles while preserving the integrity of the tissues of the donor area.

Another major difference is in the implantation of the extracted grafts. In classic FUE, this step occurs following the opening of the canals. In contrast, in DHI, implantation of the grafts occurs at the same time as the opening of the canals in the recipient areas. In addition, the hair follicles are implanted at an angle between 40° and 45°. This results in completely natural growth as it is the same angle as hair growth.

Due to the working mechanism of the instrument, it is then not required to shave completely to zero before the operation and the obtainable density is higher than that of normal FUE.

The DHI technique is applicable in both male and female patients.

For men it is most commonly used if grafting between their native hairs is needed or if high-density frontal reconstruction is planned.

For women usually the lack of hair is distributed throughout the scalp and the DHI technique could give very good results by obtaining higher densities than classical FUE without shaving the hair.

What I need to know before having a DHI autograft

Before undergoing a DHI hair transplant, it is wise to know the main features:

The DHI technique can also have disadvantages compared to other solutions. In particular:

The DHI technique for humans

While there is no one technique better than the other in terms of grafting, DHI is often preferred for several reasons. This technique is essential if one does not want to shave one’s hair. Men may also have this need because they prefer it or because they have no alternative (there may be a STRIP scar from previous transplantation).

It should be noted that the DHI technique involves less manipulation of the follicular units being grafted, all to the benefit of follicular unit survival.

The DHI technique for women

Are you a woman and interested in hair transplantation but do not want to shave? DHI is the right solution for you. With this technique you will be able to keep long hair at the top of the scalp so that you can easily cover the surgical outcome and plan an immediate return to society. With the DHI technique we are able to rebuild a hairline that is backward and/or thicken the middle part of the scalp, an area typically prone to thinning in women. DHI also requires a preliminary examination in order to verify the suitability of the donor area due to the typical miniaturization prevalent in women’s androgenetic processes.

GET A FREE QUOTE

Hair filler treatment is one of the modern techniques to combat…

In our clinic it is now possible to undergo the innovative…

Density effect trichopigmentation is one of the solutions that the technique…